Not yet a member?
Join us!

Please fill out all required fields

The theme running through the day was a sense of resilience, innovation and partnership, and an important challenge to some media narratives on the changes in the Irish community in Britain highlighted in the latest census.

It was a great pleasure to welcome Ambassador Martin Fraser as the first guest speaker of the day, and his first Irish in Britain AGM. He spoke on the importance of dialogue and trust for positive British Irish relations to ensure the future and stability of the Good Friday Agreement and practical post-Brexit trading arrangements.

He also acknowledged the huge contribution of Irish organisations throughout the pandemic and how the diverse Irish diaspora and our shared values will determine a positive future for the community here in Britain.

Irish in Britain's Chair Darren Murphy welcomed delegates and said, ”As the son of an Irish immigrant who came to Britain – to Birmingham – to find work, there can be no greater privilege than serving as chair to the national organisation representing all the vibrant and vital work your organisations do for Irish communities across Britain.”

He described the “thread of kinship and community that has made migration from Ireland to Britain the success it is today” and added that he believed the Irish community’s history of migration meant that “a vital part of the work of Irish in Britain is to stand in solidarity with other groups of migrants and refugees as they seek to find new jobs and homes, build safe and secure new lives in this country, and resist the types of discrimination and prejudice previous generations of Irish people experienced and Irish Travellers sadly still do.” 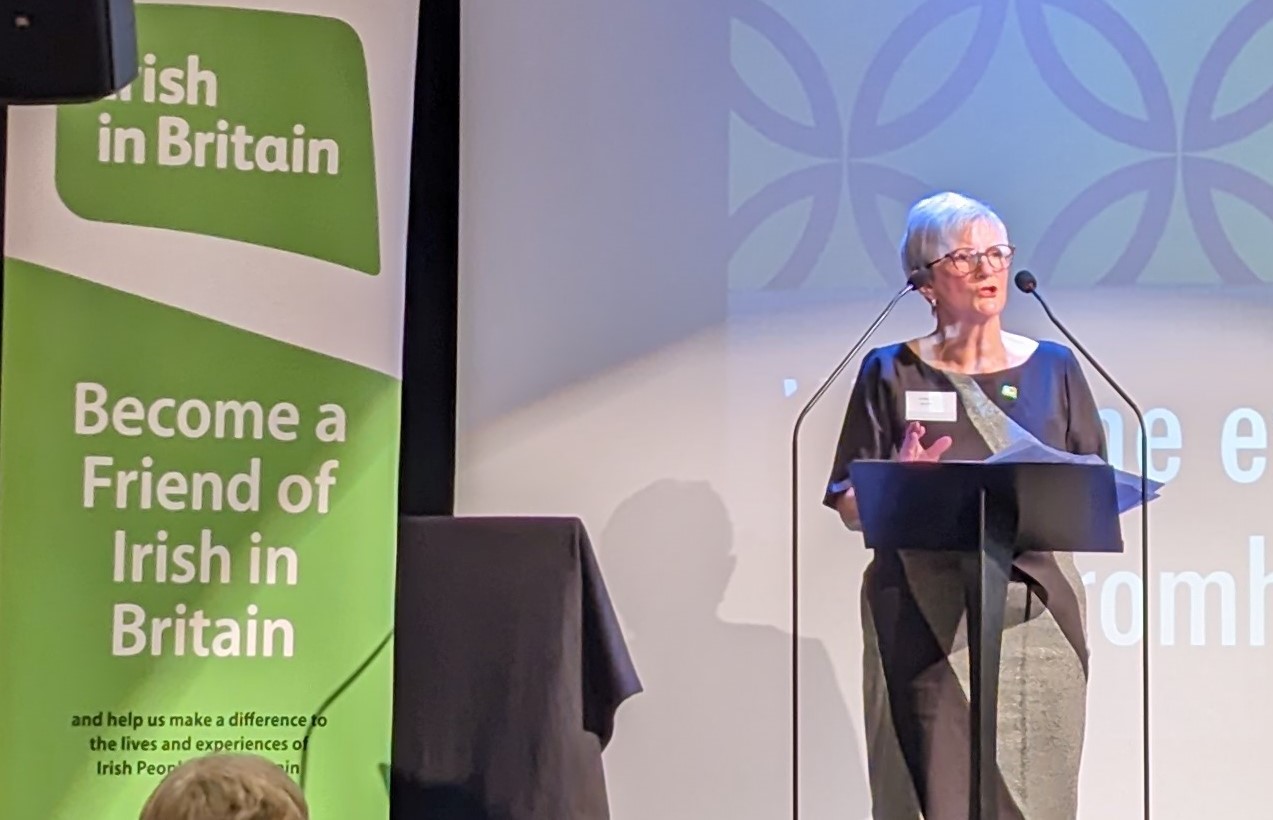 The second guest speaker of the day was Dr Mary Tilki who talked about capturing the resilience and experience of the Irish community to support positive health and wellbeing. Mary highlighted the strong history of community-led initiatives and innovation to meet the needs of older Irish people, the value of early intervention, and the role of community organisations in championing a positive aging-well culture.

Irish in Britain’s CEO Brian Dalton addressed the AGM to talk about Irish in Britain’s work this year and reflected on the results of the charity’s latest, and biggest ever, consultation with member groups about their priorities, saying:

"We will always champion rights, responsibilities and civic solidarity”, adding that he believed “Irish in Britain’s future will be determined on our advocacy for these values, as a plural, diverse and progressive organisation. There is too much at stake to be silent or passive in making our voice heard." 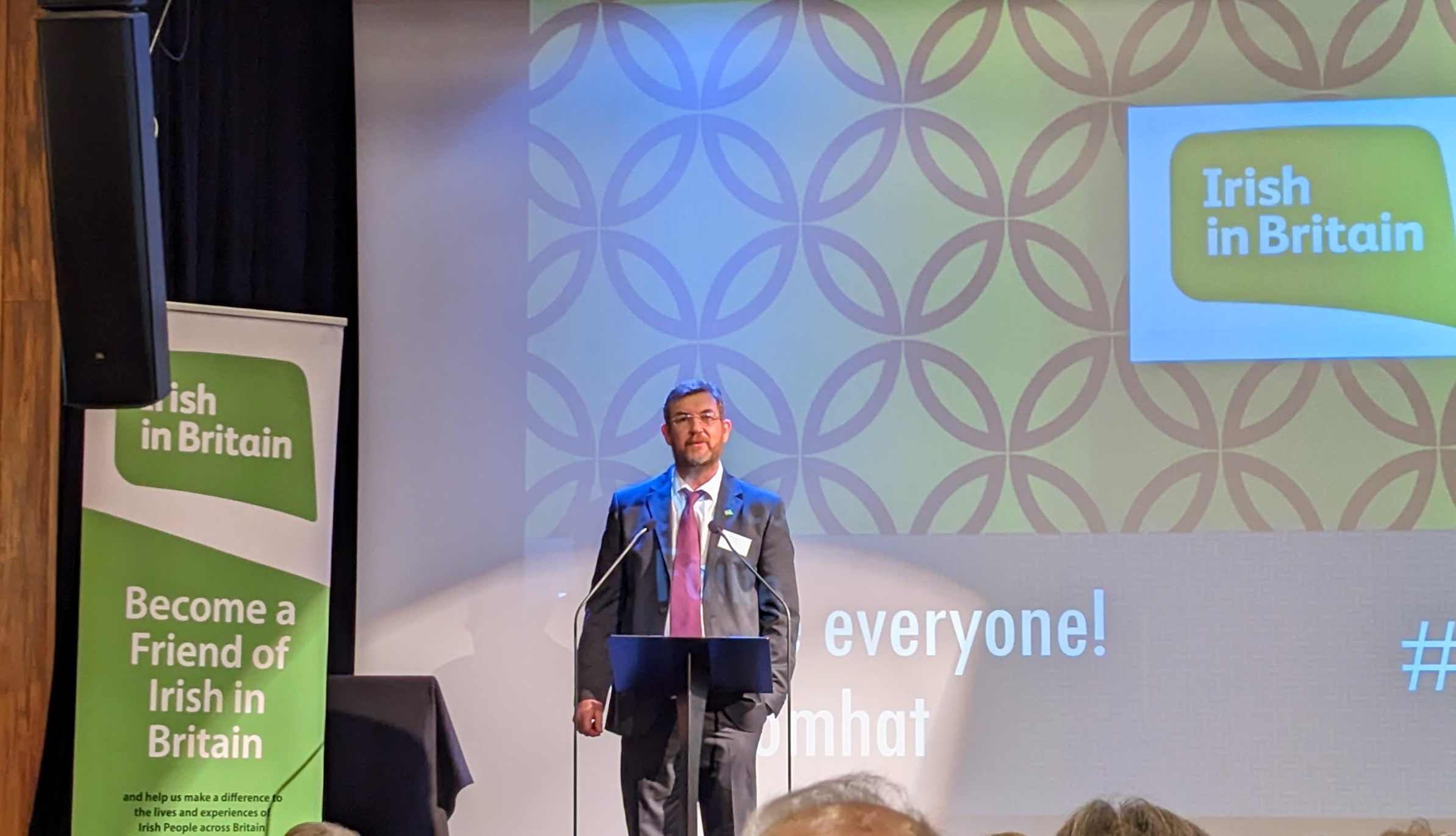 He also challenged some of the current commentary about the Irish community resulting from recent 2021 census figures saying,

“The number of Irish-born people in Britain is reducing, but I would challenge the narrative of decline, that initial data also does not include questions relating to national identity and ethnicity, second and third generations.”

He highlighted the diversity within Irish in Britain's board, team and membership as proof of successful engagement of Irish people not born on the island of Ireland.

He gave the example of the most recent participants of Irish in Britain’s New Leaders programme as an optimistic sign of the future of the Irish community, saying they were “all aspiring trustees for tomorrow, skilled and committed volunteers and supporters who want to make a difference.”

The Irish in Britain team shared details of plans for Irish in Britain's ambitious 50th anniversary heritage project, made possible with National Lottery Heritage Fund funding. This will involve the gathering of oral histories and heritage materials as well as the training of volunteers, culminating in a national touring exhibition next autumn and a permanent archive.

Throughout the day members of the Irish in Britain team reported on their work on everything from health promotion and dementia awareness to policy and public affairs. 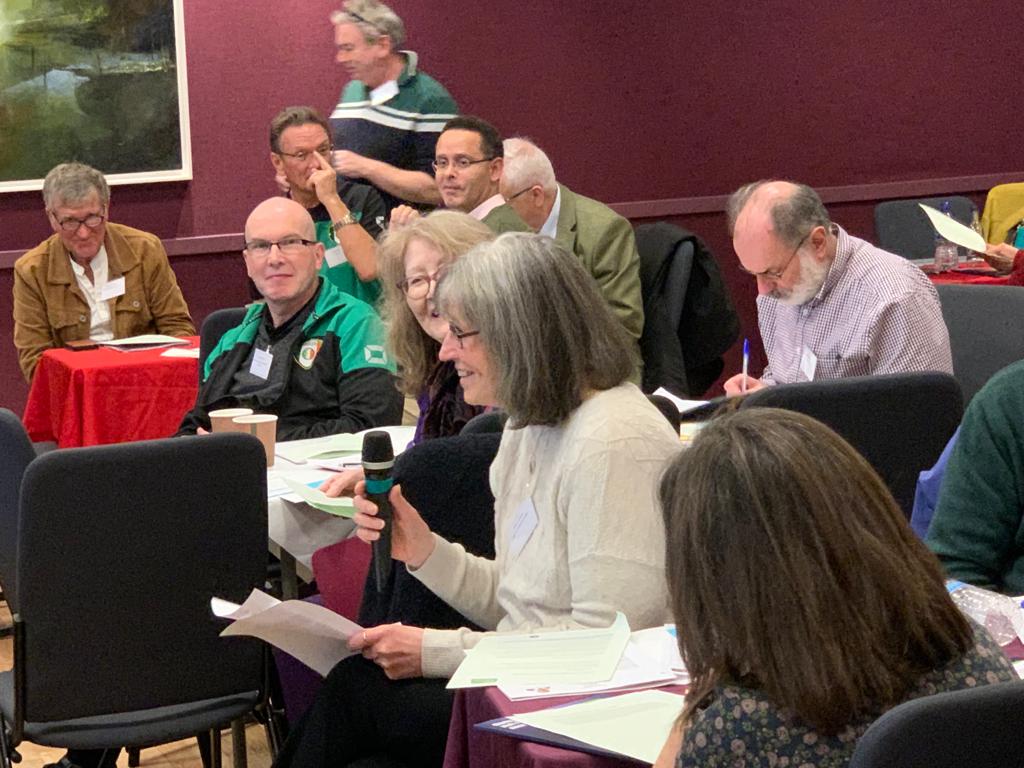 Three motions were put by member organisations, all were passed unanimously, one from Ashford Place called on Irish in Britain to “use its national profile to build skills and awareness into its network to promote positive mental health and wellbeing.” The second, proposed by London LGBT Network called for “for collective support throughout the Irish in Britain membership in examining the disregard of convictions for offences related to consensual sex between men” and pointed to the work being done to look at cases of men arrested under Irish and UK law prior to decriminalisation.

The final motion, proposed by Leeds Irish Health and Homes, called on Irish in Britain to develop a national Health and Wellbeing Strategy for the Irish community in Britain, “In the light of the ongoing impact of the global pandemic, the cost-of-living crisis and upcoming Census 2021 results”.

In a special session on the meaning of the latest data on the Irish community revealed by the 2021 census, Irish in Britain convened a panel of speakers including one of the academic team, Professor Louise Ryan, who will be working with Irish in Britain to analyse the data as it is released.

Louise is Director of the Global Diversities and Inequalities Research Centre at London Metropolitan University, she spoke alongside Bernard Purcell, editor of The Irish World, Win Lawlor from Irish Community Care, Conrad Bryan from the Association of Mixed Race Irish and Irish in Britain’s CEO Brian Dalton.

In a fascinating discussion, including many contributions from the floor, speakers talked about the complexity of identity not captured in the census numbers. Several talked of how young people who are second and third generation Irish feel comfortable with multiple identities.

Others pointed to the limitations of the census, which only has a box for ‘white/Irish’, so excluding mixed-heritage Irish people, and Win highlighted the fact that the experience of Traveller communities shows that simply counting people and minorities does not end discrimination. 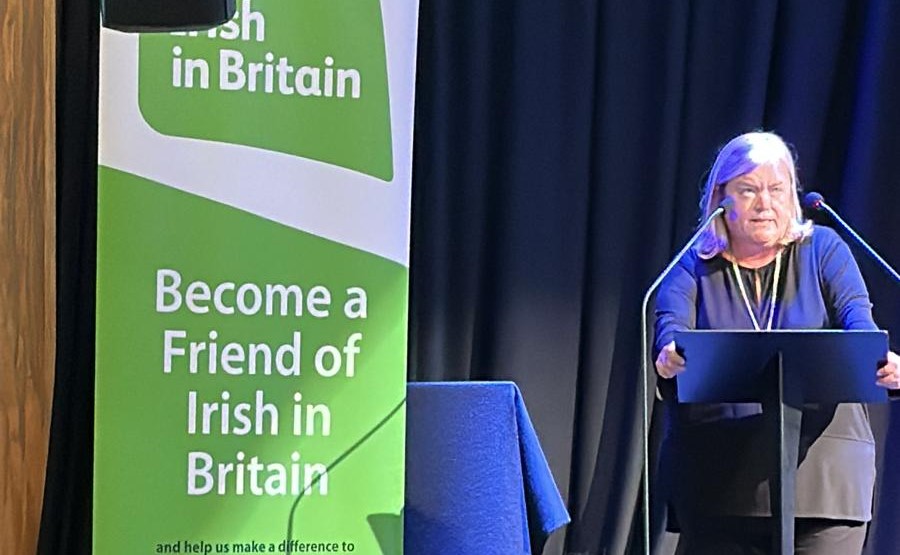 The final guest speaker of the day was Baroness Louise Casey, Louise told delegates about her family and her Irish roots and what has driven her work on homelessness, poverty and inequality.

She talked about the experiences of previous generations of Irish migrants and, echoing the sentiments expressed by many during the event, she explained why she felt it was important to “own my Irish heritage and also my desire to be part of a world, of a country and a diaspora that really does care and show compassion.”